Ásbyrgi is one of the wonders of nature, a wide, horseshoe-shaped canyon with sheer cliff faces up to 100 m high. It is 3.5 km long and over 1 km wide. At its innermost end lies Botnstjörn, a small pond surrounded by luxuriant vegetation. A distinctive rock formation rises up from the centre of Ásbyrgi, up to 250 m wide, known as Eyjan.

The area is covered in woodland consisting mainly of birch, willow and mountain ash. Several thousand recently planted pines also prosper. Arctic fulmar nest on the steep cliffs, while many other birds prefer the woods and meadows.

Ásbyrgi was formed by two or more catastrophic floods caused by glacial bursts from the northern part of the Vatnajökull ice cap, one between eight and ten thousand years ago and a second approximately three thousand years ago. Since then the bed of the river has moved eastwards. However according to legend, Sleipnir, the Norse god Odin's eight-legged horse, put one of his hooves down as the god rode by.

Although Ásbyrgi is part of the National Park, it is run by the Iceland Forest Service. 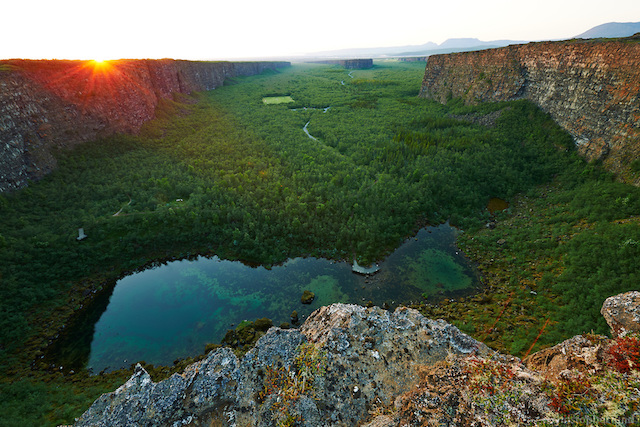